You’ve probably heard people say they have a “slipped” or “ruptured” disc in the back. Sometimes they complain that their back “went out”. What they’re most likely describing is a herniated disc. This condition is a common source of back and leg pain. At the bottom of this article I explain the best herniated disc treatment, but first I want to do some explaining.

The disc is made up of two main sections. The outer part (the annulus) is made up of tough cartilage that is comprised of series of rings. The center of the disc is a jelly-like substance called the nucleus pulposus. A disc herniates or ruptures when part of the jelly center pushes through the outer wall of the disc into the spinal canal, and puts pressure on the nerves. A disc bulge is when the jelly substance pushes the outer wall but doesn’t completely go through the wall.

What do you feel?

Lower back pain will affect four out of five people during their lifetime. The most common symptom of a herniated disc is “sciatica”. Sciatica leg pain is best described as a sharp, often shooting pain that begins in the buttocks and goes down the back of one leg. This is most often caused by pressure on the sciatic nerve that exits the spinal cord. Other symptoms include:

How do you know you have a herniated disc?

Your medical history is key to a proper diagnosis. A physical examination can usually determine which nerve roots are affected (and how seriously). A simple x-ray may show evidence of disc or degenerative spine changes. An MRI (magnetic resonance imaging) is usually the best option (most expensive) to determine which disc has herniated.

Why do discs herniate?

Discs are primarily composed of water. As we become older (after the age of 30), the water content decreases, so the discs begin to shrink and lose their shape. When the disc becomes smaller the space between the vertebrae decreases and become narrower. Also, as the disc loses water content the disc itself becomes less flexible.

While aging, excess weight, improper lifting and the decrease in water in the discs all contribute to the breaking down of discs, the primary cause of a herniation or bluge is uneven compression and torsion that’s placed on the discs.

This uneven pressure is caused by imbalances in muscles that pull the spine out of its normal position and then your body is forced to function in what I call a physical dysfunction. Every human being develops these dysfunctions over time and eventually they cause enough damage to create pain.

When it comes to herniated disc treatment, there are traditional treatments such as ice/heat, ultrasound, electrical stimulation, cortisone injections, anti-inflammatory medications and even surgery. While these may deliver some relief, it will usually be temporary if at all.

But the major problem with these traditional treatments is that they can’t fix or heal a herniated disc as they do not address the actual cause of the problem. For example, even if you were to have a surgery and get some pain relief, the fact is the dysfunctions that caused the disc to herniated in the first place are still there and if not addressed, they will continue to place uneven pressure and strain on the discs and sooner or later you will likely have another problem
with that disc, or others.

Without identifying and addressing the underlying cause of the problem, which is the physical dysfunctions caused by imbalances in muscles, you will likely continue to suffer with this condition and the continuous flare ups for years. Unfortunately, most doctors, chiropractors and physical therapists don’t spend time or focus on identifying the physical dysfunctions that are responsible for the condition so most people end up jumping from one useless traditional treatment to the next and suffer for months or years unnecessarily.

If you have been diagnosed with a herniated disc, or are wondering if your back pain may be caused by a herniated disc, either way you must identify and address the physical dysfunctions that are causing your pain as part of your recovery.

This has been a guest post by Dr. Robert Duvall, DPT, ATC, MGFI

Dr. Robert Duvall is a Doctor of Physical Therapy and Certified Athletic Trainer. He has helped Thousands of people identify and cure their back pain by educating them with articles such as the one above…

To read more articles by Dr. Duvall you can visit the Articles Section at the Healthy Back Institute. 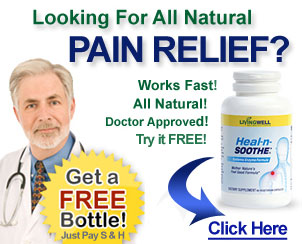 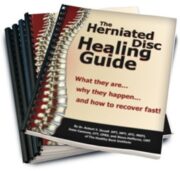 "How I Cured My Back Pain, Sciatica, Spinal Stenosis, AND A Herniated Disc!"

Success! Check your inbox for Part 1 of the back pain healing guide!